A ragtag group of hooligans and ne’er-do-wells run around the city for seemingly no reason whatsoever. They appear to enjoy it and take numerous photos along the way. This document serves as a record of the events of the first RCR Quarantine Relay so that future generations — or more likely, the extraterrestrials who eventually find Earth after humanity is wiped out by the giant meteor we all know that 2020 has in store for us — can better understand the psychological effects of quarantine life in the first months A.C. (after COVID-19).

It would have been around this time of the year that one of RCR’s main events — the Ragnar Relay — takes place. Last year, we ran the Ragnar Northwest Passage Relay and had a blast! We were really looking forward to reliving this kind of experience, which essentially was a group camping/road trip. Unfortunately, 2020 had other plans and our regular group runs, as well as goal races, were put on hold indefinitely.

As the novelty and peace of the WFH lull slowly faded, our group of stereotypically antisocial computer scientists started to miss the community aspect of running. Running alone and brunching over Zoom was just not the same without the constant bickering, e-graph lectures, and sneaky group selfies. Thus, one fine Wednesday (or Thursday, or Monday, who even knows anymore), Ellis suggested we do a giant relay around Seattle. So we did.

The idea was well received and we had 21 people sign up for the race. Our original plan was to run the relay on May 31. But as they say, men make plans and 2020 laughs, this time in the form of historic civil unrest. When things seemed to settle down a bit, June 28 emerged as the new best date, and fortunately we still had 21 runners ready to go.

The most logistics-heavy but also the most fun part of planning the race was route design. The Shadow Council started with roughly solving a TSP (in sub-polynomial time) with each vertex being a runner’s home. The legs were then extended to hit selfie-worthy places around Seattle, while keeping in mind each runner’s preferred distance. Our first draft had us starting at 5-ish am and finishing around 3 am, in the true spirit of Ragnar relays. However, the IRB decided not to approve our plan, citing ridiculous notions such as “safety” and “no one wants to wake up at 4:30 just to run.” We adjusted our start and end times to sunrise and sunset, shortening routes and moving the meeting locations accordingly.

We ended up with decent coverage of most interesting sites in Seattle, from Seward Park, I-90, Lake Washington Blvd to UW campus and northwest Seattle parks like Carkeek and Golden Gardens. Finally, it was only appropriate that we end at the Space Needle, where the finish line ribbon was made of a premium four-ply Charmin ultra soft toilet paper roll. 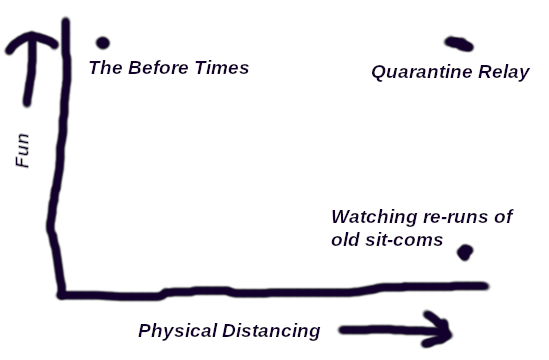 R1: This work is innovative, inspirational, and miles ahead of any race report I’ve ever read. I recommend acceptance without further revision.

R3: Strong accept. I am an expert in this domain and will champion this relay by running the entire route by myself next time.